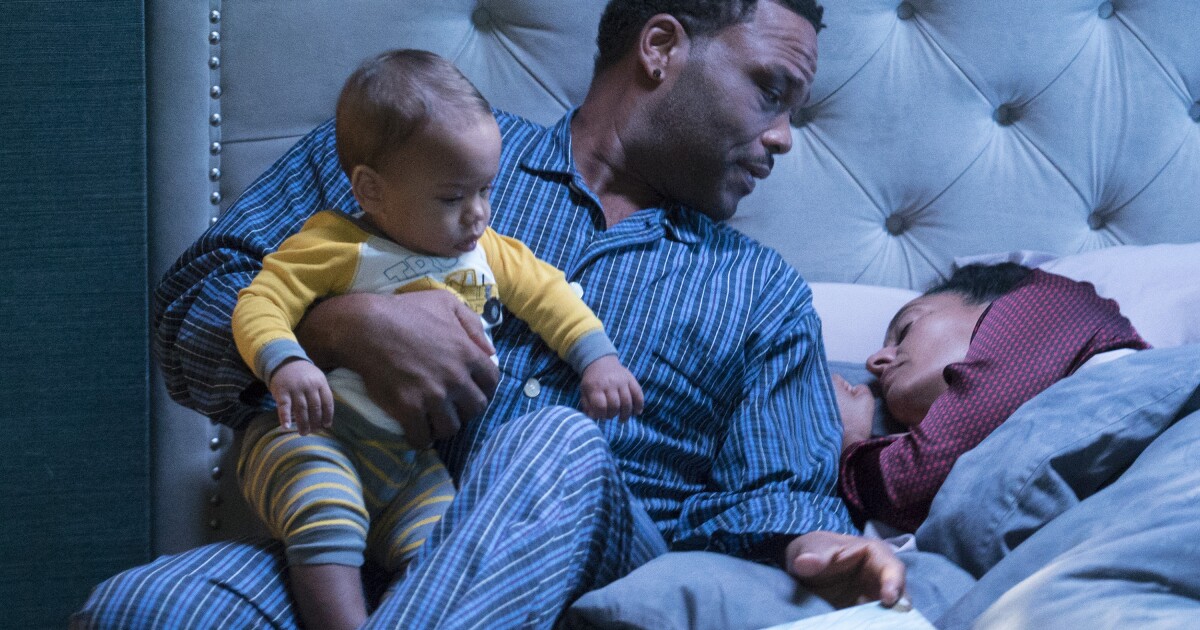 There’s a terrible storm outside, and no one in the Johnson family can sleep in “Please, Baby, Please.” Things are tense in the controversial season four “black-ish” episode, which was shelved by Disney in 2018 and finally released today on Hulu.

Family patriarch Dre (Anthony Anderson) feels the pressure to calm his restless brood, starting with fussy baby Devante. Dre can’t help but pepper the innocent bedtime story he reads his son with his own fears about all that’s gone wrong in America over the past year. No wonder the infant can’t sleep.

Trump’s been in office 12 months, and everything’s a mess. Dre’s just calling it like it is, much to the chagrin of his sleep-deprived wife, Bow (Tracee Ellis Ross), who points out that their son has the rest of his life to be terrified by the world outside their door. Home is the one safe place they have, so please try to keep it that way. Both parents struggle with how to explain away, or downplay, the dangers of a nation on the brink.

It’s a hard, poignant look at 2017, through the lens of a comedy that’s never afraid to tackle tough issues while challenging viewers to take a look in the mirror.

But what’s so controversial about this particular half-hour of television is that it was yanked by ABC shortly before air, making it one of the best-known TV episodes of recent vintage that no one’s seen. Speculating about what scared off the network’s execs is part of the fun of watching the episode, listed on Hulu as “S4 E99” of the series.

“Please, Baby, Please” offers a wide sweep over the anger, racism and fear that underpinned the rise of Donald Trump, who Dre refers to as “The Shady King” throughout the episode. It’s also a greatest hits of that year’s tragedies — floods, mass shootings, hatred toward immigrants, Russian election-meddling, gay bashing — in a combination of animated explainers, news clips and chats between Johnson family members.

“Black-ish” masterfully deconstructs something that most network comedies wouldn’t dare go near: the idea that Trump, the rise of white nationalist movements and the deep divisions among many Americans are a form of backlash — against the fact that a Black man won the presidency for two terms — led by enraged citizens whose political zeal is in fact an attempt to turn back the clock. Another potential worry for ABC and its corporate parent, Disney (which also owns Hulu), may have been grandpa Earl “Pops” Johnson’s (Laurence Fishburne) spot-on commentary about why Black pride is positive and white pride is dangerous when contrasted with America’s troubled racial history.

Series creator Kenya Barris tweeted Monday that “Please, Baby, Please,” was finally going to see the light of day after he asked Walt Disney Television “to revisit making the episode available. Recognizing the importance of this moment, they listened and agreed.” (Notably, Barris left ABC for Netflix soon after ABC shelved “Please, Baby, Please.”) The decision to release the episode comes on the heels of a massive national reckoning about many of the issues explored in in its brief running time, and follows ABC’s re-airing of two other timely “black-ish” episodes — “Hope” and “Juneteenth” — which addressed police brutality and America’s eagerness to forget about slavery.

“Please, Baby, Please” is a compendium of many troubling realities circa 2017-18: superstorms; police brutality; Trump pooh-poohing climate change science and pulling out of the Paris accord; the shockwaves of Colin Kaepernick taking a knee during the national anthem. In the episode, Dre and son Junior (Marcus Scribner) debate the merits of athletes protesting on the field, and Dre reminds him of the of all the sports figures before Kaepernick — Muhammed Ali, Arthur Ashe, Tommie Smith and John Carlos — who sacrificed their careers to improve the lives of all Black people, replete with a visual history lesson dating back to the 1960s.

The episode resonates today because 2020 looks a lot like 2018. The Johnson family is sequestered in the house, riding out the storm, waiting for things to clear up. They’re learning how to cope with a torrent of bad news, and lean on each other for support. And, like its predecessors “Hope” and “Juneteenth,” “Please, Baby, Please” is an important reminder that the sitcom’s treatment of certain aspects of the Black experience in America remains timely for one fundamental reason: Despite being locked in the Disney vault for more than two years, the problems it dramatizes are yet to be solved.