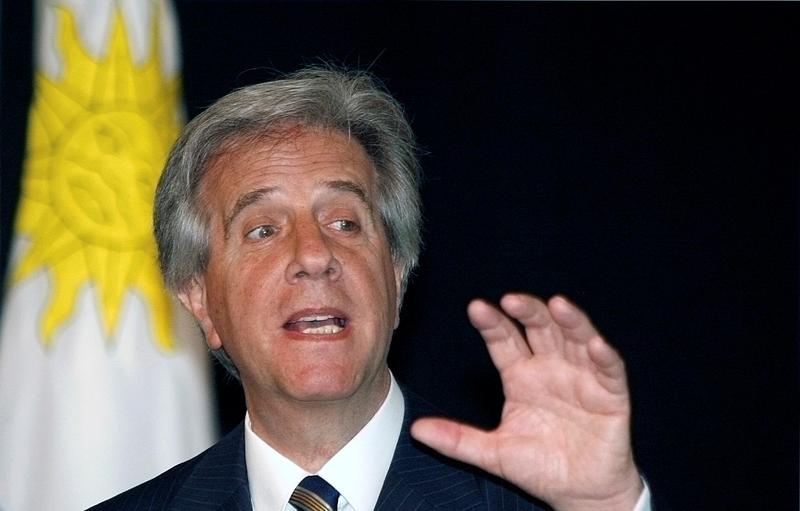 MONTEVIDEO (Reuters) – Tabaré Vázquez, an oncologist who became the first centre-left politician to be elected president of Uruguay and won popularity for a mix of pro-business policies and strong welfare programs, died on Sunday at the age of 80 after a battle with lung cancer.

Vázquez, who served as the South American country’s leader from 2005-2010 and 2015-2020, was diagnosed with cancer last year. The Broad Front coalition he belonged to ran Uruguay for 15 years up until elections last year.

His son, Alvaro Vázquez, said he died at home, in the presence of family and friends. “On behalf of the family, we want to thank all Uruguayans for the love received by him over so many years,” he tweeted.

The Broad Front said in a statement after news of the death that “his example of political integrity and unwavering commitment to our country and the people will drive us to continue his legacy.”

The son of a union leader, Vázquez was born into a working-class neighborhood in the capital Montevideo on Jan. 17, 1940. He worked a set of disparate menial jobs while pursuing his goal to study medicine and later specialized in oncology, only turning to political activism at 43.

“Ever since I was a boy I liked biology and medicine but I never even dreamed of being a mayor or a lawmaker,” he wrote in his 2003 book “Conversations with Tabaré Vázquez.”

He formally joined the Socialist Party in 1983, when the tiny cattle-farming nation of 3.4 million people was living under a 12-year military dictatorship, and moved fast through the ranks of the umbrella Frente Amplio coalition, serving as mayor of Montevideo from 1990 to 1994.

“He had the sensitivity that you get from growing up in poverty but coupled with the knowledge that the study provides to those who had the opportunity to go to university,” Juan Salgado, a businessman who was a childhood friend and advisor of Vázquez, told Reuters.

Vázquez ran twice for the presidency in 1994 and 1999 before eventually winning the top job in 2004, taking office the following year.

He was known for his anti-poverty policies and efforts to strengthen unions and bolster the social safety net, which helped kick-start a decade of robust growth and slashed poverty after a deep crisis in the early 2000s. But the opposition accused him of creating a “welfare state.”

He pushed for answers in the cases of hundreds of people who disappeared during the dictatorship and won international notoriety for adopting a fierce anti-smoking campaign that required cigarette sellers to include graphic health warnings on their packaging, generating a legal challenge from tobacco firm Philip Morris which Uruguay ultimately won.

Since Uruguay’s constitution bans presidents from running for consecutive terms, he stepped down in 2010 and was replaced by ex-guerrilla José Mujica, also of the Broad Front, who famously legalized the use and production of cannabis.

Vázquez returned to office for a second term in 2015 which coincided with a slowdown in economic growth due to global trade woes and the effects of drought and flooding on the country’s key farm sector.

There was also the blow of the 2017 resignation of Raúl Sendic, his vice president, over corruption allegations.

Bigger, more personal blows came in 2019 when his wife María Auxiliadora Delgado died and he announced only days later that a malignant tumor had appeared in one of his lungs.