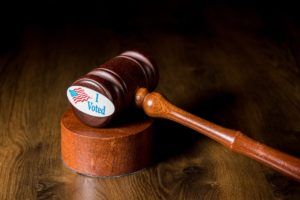 Those efforts – led by anti-marijuana politicians and other opponents – threaten to stop or delay the implementation of new medical and recreational cannabis markets that would generate hundreds of millions of dollars in sales a year.

In Idaho, some state lawmakers are even trying to preemptively ban marijuana legalization through an amendment to the state constitution.

Attempts to fight off challenges to ballot initiatives, particularly in conservative states, could become more costly in the future. They also could have a chilling effect on new voter-driven measures.

The hope among industry executives is that public sentiment ultimately will prevail: The five-state sweep for marijuana ballot initiatives on Nov. 3 signals that Americans strongly support legal marijuana, even in the most conservative of states.

“You have to recognize we are in red territory, and that’s part of this,” Matt Schweich, deputy director of the Marijuana Policy Project (MPP), said of the recent legal challenges. MPP led ballot campaigns in Montana and South Dakota.

“At the same time, we are living in a time when democratic norms are under assault. Politicians no longer feel they have to uphold the vote.”

Paul Armentano, deputy director of NORML in Washington DC, noted that in the past when there were legal battles, they generally preceded getting a marijuana measure on the ballot.

For example, a secretary of state might reject the language of an initiative or the number of valid signatures.

Also, Armentano said, anti-marijuana public officials in the past had enough clout to control the message and influence voters to reject initiatives.

But it’s a relatively new phenomenon, he said, “to have these sorts of challenges taking place following a vote … and to nullify a successful vote.”

He concurred that changing political norms could be one factor in play.

“Certainly, (former President) Trump has established that you can lose an election and continue to act like you didn’t,” Armentano said.

“Certainly, that’s a playbook that’s been shown to the world.”

But even before the November election, reluctance to implement the public’s will has been in evidence in some states.

For example, former Maine Gov. Paul LePage thwarted the implementation of adult-use legalization in the state for a couple of years.

And more recently, lawmakers in Utah enacted a much more narrow medical cannabis program than was called for by a voter-approved citizen initiative.

In a key decision, the Utah Supreme Court ruled that the governor and Legislature were within their legal rights to enact a more restrictive program, and MMJ advocates decided to drop a second challenge.

Challenges based on single-subject rule

The Nebraska Supreme Court shot down a medical marijuana initiative before Nov. 3, saying it violated the state’s single-subject rule for ballot measures. That rule bars packing multiple issues into a single yes-or-no question.

Armentano noted that many states, including Colorado, have single-subject rules, and it hasn’t been an issue.

The ballot-measure system is designed, he noted, for state officials to review and approve initiative language before an election “so we don’t have an incident after the fact where the court comes in and says your vote doesn’t matter.”

But the single-subject rule has become the template for the effort by South Dakota Gov. Kristi Noem to overturn that state’s voter-approved adult-use initiative.

After the election, Noem, a Republican and vocal opponent to marijuana, stepped in.

She instructed a state highway patrol official to file a legal challenge to the recreational marijuana initiative in large part based on the claim that the initiative violated the single-subject rule.

A circuit judge recently agreed the initiative is unconstitutional, and now South Dakotans for Better Marijuana Laws, which backed the initiative, is preparing to appeal to the state Supreme Court.

“I cannot imagine our opponents are not going to make similar challenges going forward regardless of the initiative language,” Armentano said. “This is now going to be a standard part of the playbook.”

Noem hasn’t stopped there. She also has moved to delay the implementation of the medical cannabis initiative so strongly supported by voters.

“Gov. Noem doesn’t respect the will of the people,” Schweich said. “I haven’t seen a medical marijuana initiative treated like this.”

Schweich said he believes Noem’s move is a “plan to ultimately repeal and replace” the voter-approved initiative.

In Mississippi, a constitutional challenge to voter-approved medical marijuana is especially egregious in Armentano’s view.

A lawsuit filed by a public official claims the medical marijuana initiative should be invalidated because it didn’t meet a state standard requiring an equal number of signatures from Mississippi’s former five congressional districts. The state lost a congressional district after the 2000 census.

Armentano noted the challenge, which will be heard by the state Supreme Court in April, is based on a signature-collection technicality that would nullify “every initiative in the past two decades.”

So, in Mississippi, “obviously there’s selectivity (against marijuana) going on,” he said.

Despite opposition to legal marijuana by many lawmakers and state officials, the state Board of Health is moving ahead in developing regulations by July 1.

Then there’s Idaho, where the state Senate recently passed a constitutional amendment that would ban Idaho from legalizing any psychoactive drug, including marijuana. The bill now will be considered by the state House.

Montana, which also has faced legal challenges to its voter-approved recreational marijuana initiative, shows the importance of having a governor committed to upholding the vote.

But the Montana Department of Revenue has established a website for adult-use marijuana, which says the state will begin accepting license applications by Oct. 1, as scheduled.

“So far, implementation is going fairly well,” MPP’s Schweich said. “There is a little bit of an attempt of obstruction” from lawmakers, but not from the governor.

In fact, in his recent State of the State address, Montana Gov. Greg Gianforte, a Republican, discussed using tax revenue from recreational marijuana sales to help fund a program aimed at addressing methamphetamine and opioid addiction.

The new playbook to challenge initiatives after the fact also might have a chilling effect on the willingness of funders and donors to bankroll the initiatives, Armentano said.

“Historically, the battles were fought before the election, and it’s certainly going to increase the overall expense and resources, not just to win these campaigns but to make sure the law is actually implemented,” he said.

But there also is a silver lining – public support for legalization will make it increasingly difficult for governors and lawmakers to ignore the will of their constituents.

Armentano noted that in some ways the current effort is a “sort of Hail Mary, a last resort” to thwarting marijuana legalization.

Jeff Smith can be reached at [email protected].