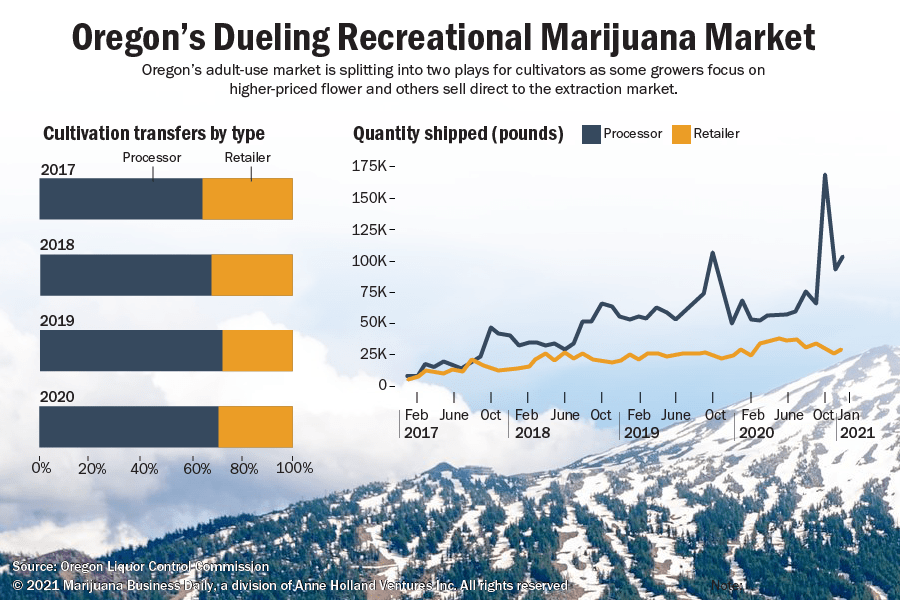 Oregon recreational marijuana companies are experiencing the best market conditions in years, with demand far outpacing supply because of the COVID-19 pandemic and more consumers forgoing the illicit market in favor of legal retailers.

But the question remains whether the trend will continue once the pandemic subsides and state regulators offer additional production licenses to cannabis entrepreneurs.

According to a recent supply and demand report conducted by the Oregon Liquor Control Commission (OLCC), cannabis production has increased 78% since 2019, while the amount of cannabis sold has skyrocketed by 150%.

Both have their advantages and disadvantages.

In addition to price differences, both offer varying amounts of risk, including not finding a buyer for top-shelf flower or being forced to take too low of a price by sending the material to extraction.

Another key point from the report: The amount of cannabis harvested in 2020 increased by 37% versus 2019, and the OLCC could issue up to 100 more producer licenses by April.

They also said that anyone entering the Oregon cannabis market should be prepared for tough competition, with the established cultivators already having dialed in their production costs and formed strong networks of buyers.

Will the demand hold up?

Industry insiders suggest increased demand reflects new consumers entering the market and people turning to marijuana as a substitute for products such as alcohol and opioids and even sleep aids during the pandemic.

But whether that will continue once the pandemic eases is an open question.

Jesce Horton, chief executive officer of Portland-based cannabis cultivator Lowd, said the 150% increase in sales likely won’t continue at that pace, but he does expect the trend of converting first-timers to the market will persist.

“More people are coming from the illicit market,” he said. “They’re seeing the plethora of new products, the great quality, the benefits of having tested product.”

Casey Houlihan, executive director of the Oregon Retailers of Cannabis Association, based in Portland, said in 2020 the retail marijuana sector experienced “pretty tremendous growth” – a 38% increase in overall revenue.

He agreed that some consumers are shifting from the illicit market to the legal side.

“And once we bring those consumers in from illicit markets, they tend to stay in legal markets,” Houlihan said.

He added that the OLCC’s decision to allow retailers to offer new services such as curbside pickup and online sales helped to make the licensed program more appealing to consumers.

Meghan Miller, chief cultivation and cannabis community officer for Portland-based Chalice Farms, said her company has increased flower production with the expectation that the increase in demand isn’t temporary.

“I don’t think this is going to go away,” she said.

Besides the converts from the illicit market, cannabis is drawing more people from a health and wellness perspective, according to Miller.

“People are truly using flower as their medicine,” she added.

Shane McKee, a Portland-based grower and owner of Shango Premium Cannabis, said the OLCC’s numbers reflect what he’s seeing at his company.

“We sell out of every harvest,” he added.

Retailers have even been cold-calling his company looking for product.

“Which tells me it’s in short supply,” McKee said.

As the market matures, two types of business models have emerged for cultivators.

Growers can either target the higher-end retail flower market or sell directly to processors.

Horton agreed with the findings of the report, saying the amount of production coupled with the increased demand for processed cannabis products is driving growers to sell directly to processors.

“You walk into a dispensary and the majority of the products are not flower,” he said.

Processors need that supply of cannabis for manufacturing to fuel the innovation and growth in the sector.

That’s in addition to the stiff competition growers face selling flower to retailers, regardless of how the flower is grown.

Miller agreed that Oregon’s cannabis cultivation sector requires a high level of skill to be successful.

“The competition on the flower shelves is very strong,” she added.

McKee believes the separation 0between the two markets will be a growing trend as more outdoor cultivators target the extraction market.

For one, the indoor growers don’t produce enough trim to meet the needs of the processors, he said.

Outdoor growers who have their cost of production set low can see a “very viable” opportunity selling straight to processing, according to McKee.

The OLCC is still working through a backlog of production-license applications that could increase the number of new grow permits by 100 before April 2021.

Despite overproduction flooding the cannabis market in the past and driving prices to record lows for growers several years ago, Horton said he’s not worried about new entrants to the market.

That goes back to the competitive nature of the cultivation sector.

“We’re seeing that the market will shake things out,” Horton said. “The cream of the crop will rise to the top. The best cultivators will still do very well.”

McKee agreed, saying that growers in Oregon must be good at what they do in order to succeed.

Bart Schaneman can be reached at [email protected]